The VMAs has been dubbed as the “superbowl for pop music” and may be one of the most controversial award shows out there (flashback to Miley Cyrus’ 2013 performance with Robin Thicke). I was lucky enough to attend the 2016 MTV Video Music Awards on Aug. 28th at Madison Square Garden in New York City. 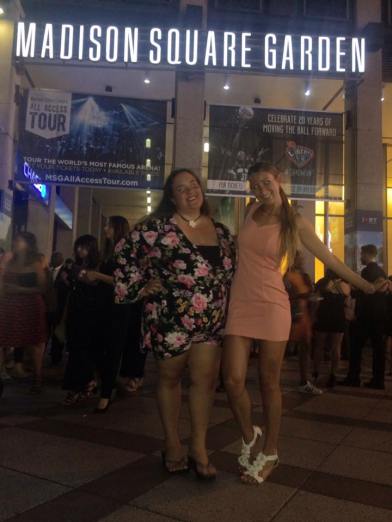 I have always dreamed of going to an award show and being in a pool of celebrities, and I cannot believe it actually happened. I also always wondered what occurred behind the scenes, so here are a few things I noted to myself during the show:

Part 1: Obviously there were celebrities, but it seemed like this year was less star-studded than usual. There was no Taylor, Selena, Justin, Adele, Sia or other huge names and nominated people that one would expect to be present.

Part 2: The celebrities arrive extremely last minute, and seats were still being filled as the show started!

I am always so amazed about how small television sets are because on camera, everything looks so much larger. The stage was quite tiny in person, and when I watched some of the show afterwards and really paid attention, I noticed its size. The power of getting the right angle is real!

Speaking of cameras, the show is definitely taped for television. The whole night was a rotation of performances, awards and long commercial breaks. I can see why some celebrities may get bored of award shows.

Speaking of awards, there are so few awards actually given out on stage, it is shocking. Why would you need awards at an award show, anyway?

Celebrities were changing seats, conversing and taking pictures during every commercial break. They also got served beverages.

If you have ever seen the VMAs, you probably noticed that the pit section, which is the section surrounding the stage, is filled with dancing fans during performances. The VMAs actually had people yelling at the audience to look more lively during the acts. It is easy to have fun during a performance, but it is a bit awkward waving your hands against the beat of a slow song!

These are just a few of the many things I noticed during the incredible concert, I mean award show. Thank you MTV for allowing me to feel like a celebrity for a night!