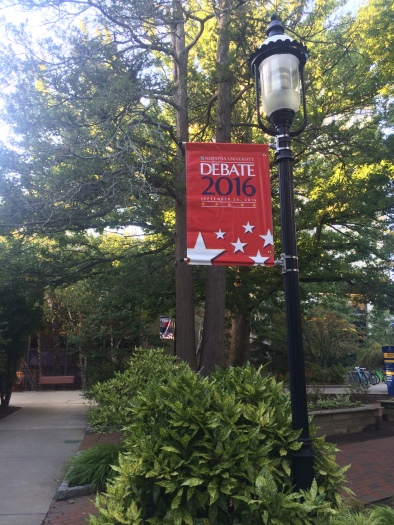 In the spring of 2016 Hofstra University learned it would be an alternate to host the first 2016 presidential debate between Hillary Clinton and Donald Trump. Although the Hofstra staff and students were saddened Hofstra did not win the ticket to host the debate, we could not complain because Hofstra was lucky enough to host a debate in the previous two elections. Then, in late July, Vice President of University Relations Melissa Connolly received the call of all calls: the university set to host the first debate dropped, and now Hofstra would have the honor. I mentioned months ago that Connolly was in Italy with my study abroad program when she got the news. She had to quickly rush home to begin the planning of a debate that one usually has about a year for which to prepare. Hofstra only had two months.

Of course, the fact that Hofstra hosted a presidential debate in the last two elections gave us an advantage that helped us scramble it all together in such a short timeframe. After countless hours of phone calls, meetings, conferences, emails and organizing thousands of people and millions of dollars, the week of the first presidential debate rolled about and it was crunch time.

It seemed as if Hofstra went from its normal self to a full-blown movie set in a matter of days. The David S. Mack Sports Complex began its transformation to media row as the school year began, with an outside stage for reporters being built. Banners were hung about a week before the debate and extra cameras, spotlights and wires were soon placed around campus. Then, MSNBC, CNN and Fox began building their stages, and before we knew it, everything was set and the debate was here.

There are no words to describe the amount of work that University Relations and Hofstra took on to roll out the first presidential debate of 2016. From the first day we knew we were hosting it to the last, nothing but excitement (and an overload of stress for the planners) filled the air, and the energy on campus was booming. It was a once in a lifetime experience for sure, and I am thankful I got to partake in the making of history.