What a way to end vacation! We signed up for a “Snorkel and Conch Cruise” with Caicos Dream Tours, which is a four-hour snorkeling and lunch cruise around the waters of the Grace Bay area.

A shuttle bus picked us up at our hotel at 8 a.m. and drove us to another resort, where we were given flippers and floatation devices. After about 30 minutes, we were loaded onto the biggest boat of the three that voyaged our way. Once everyone was settled, the captain welcomed the group and gave a brief overview of our day. I expected him to tell us rules, but he said the only rule of the boat is that everyone had to slide down the slide that came from the second deck. It seemed very relaxed and easy going.

After a 20-minute cruise, we stopped at the barrier reef that lines the island, which is apparently one of the largest in the world. If I am being honest, the snorkeling at Bight Reef was more impressive in terms of marine life. However, this reef presented a larger array of corals and coral formations, which I think was really cool. I have never swum on a reef with so many different nooks and crannies before.

I mentioned floatation devices before (flotation belts), which were “required” when snorkeling. However, my dad talked to the captain and we decided that it was not necessary for us to use them, especially if we wanted to be able to dive down and explore the reef closer. I never want to be that tourist who thinks she knows better and can do what she wants, but I can confidently say not using the belts was the right choice.

I’m not sure how long we were snorkeling, but I was surprised when our guide told us to start heading back to the boat and I realized there were only a few of us left in the water.

Once we got back to the boat, we had a few minutes to use the slide. The slide was curved, and gave lighter people a nice bump and swoosh into the air. After a few times, my bottom had enough. I could appreciate the fun of sliding off a two-story boat into warm, clear water, though. To my surprise, there were a bunch of black fish around the boat, which was a unique picture to slide into. 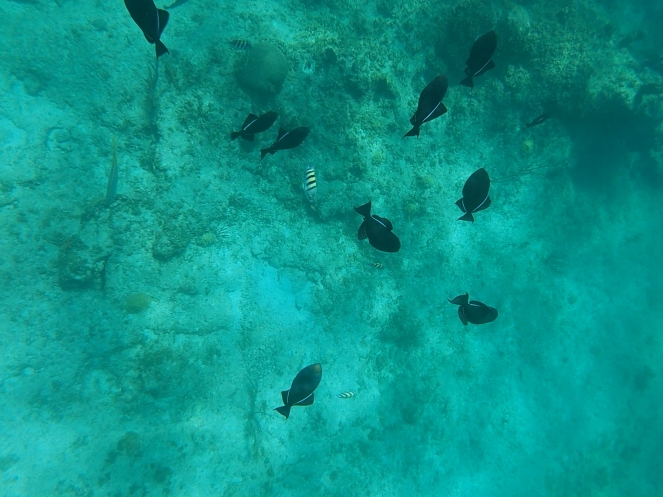 The captain eventually started the boat and brought us to our next and final destination: Half Moon Bay. We anchored the boat just a few feet from land and were served some lunch. I was not too hungry for some reason, so I had a few of my sister’s Doritos, a bite of freshly prepared conch ceviche and quickly hopped off the boat to explore the island of Little Water Quay.

This Island is unique because it is home to many iguanas who enjoy the bush environment. We easily spotted them in bushes and crawling across the sand. We noticed a lot of them were pierced with beads, which I assume is a tracking system.

Once we crossed over the brush area, we came across a shallow inlet with tourists who were on their way out. This was perfect timing because we basically got the beautiful area to ourselves. We were pointed to a two-foot lemon shark which was an unexpected find.

By the time we were done taking photos, finding the shark and walking through the inches of clear water, the rest of our group caught up with us, including our father. We greeted him, hunted for some more iguanas and then went to where the boat was anchored.

I went up to one of the tour guides who was cleaning conches, which ended up being a gift for each family on the boat, which was a kind gesture and added bonus of the excursion. Apparently we had missed a guide clean and cut the conch for the group, but I was not too upset.

We spent the remainder of the time wading in the water and keeping an eye on a stingray who was circling back and forth near the boat. I even had a chance to quickly snorkel at the reef that was about 20 feet from the boat, which was bustling with small and brightly colored fish. 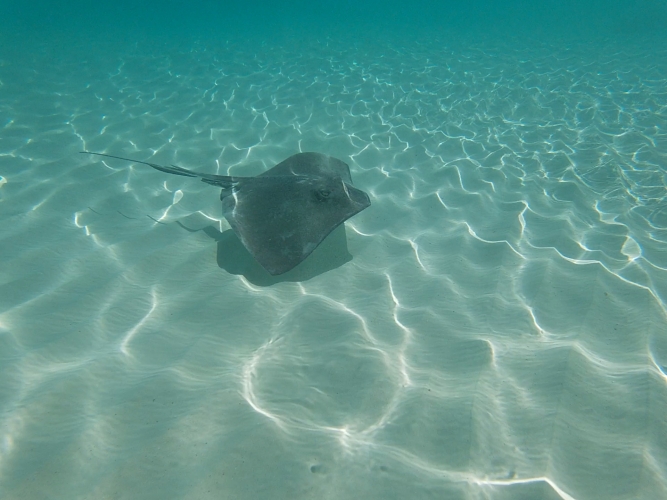 Sadly, our time on the trip was over and we headed for land. The cruise back in reminded me of the party boat I was on in Ibiza because it turned into a bit of a dance party. I was dancing with some fellow passengers and one of the snorkel guides to Rihanna and Bruno Mars as I sipped on some rum punch, which seems to be the drink of the island. I could not complain one bit.

The cruise was without a doubt the best way to end the trip. My favorite part has to be when the snorkel guide told the group I was a mermaid because I was swimming fast and diving so much. The only negative thing I would say about the cruise is Caicos Dream Tours describes the cruise as a three-stop cruise. We only stopped at two places.

The rest of the day was spent relaxing beachside and swimming. I even got up on a paddleboard for a little bit. Luckily, that was before the coast patrol came near our swimming zone and told us it’s our best interest to wear a life jacket while participating in any water activities. Hey—mermaids need to play!