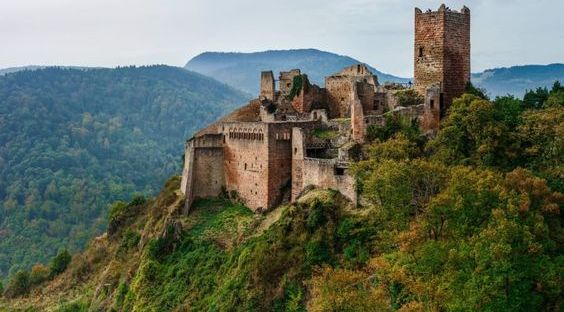 Travelers are bringing new ways to explore into the spotlight, from choosing out-of-the-way islands and towns to planning surprise trips. Pinterest released its fifth annual trends list, which is based on the steadily increasing search of popular categories on the platform. Check out the top 10 travel trends for 2019, as forecast by Pinterest.

Run down and scenic

Why go to a beautifully kept palace when you can walk through a dilapidated castle? Sightseers are on the hunt for ruins, and have caused a 142 percent spike in the search for “abandoned castles,” according to Pinterest.

People are less impressed by the built-up, tourist-filled islands they are used to hearing about. Now, Pinterest says people are looking into lesser-known escapes for a unique, more authentic experience. The site saw a 179 percent increase in “less traveled islands.”

Bike tours means seeing more in less time, and the concept is catching on. The search for “bike tours” jumped by 64 percent, according to Pinterest.

People are finding enjoyment in planning surprise trips for loved ones. Or, they are taking all the stress out of planning and allowing a travel company to organize a trip for them, without revealing the destination. Pinterest saw a 192 percent increase in searches for “surprise destination.”

Off the beaten path

Travelers are making sure to include some smaller, less-crowded towns in their itineraries for a more eclectic trip. There was a surge in “small town travel” searches by 276 percent, according to Pinterest.

People are more aware of the footprint they leave on Earth and are packing their concerns in their suitcases by picking more sustainable trips. The search for “zero waste travel” spiked by 74 percent in the last year, according to Pinterest.

Known for apple cider, pumpkin picking and vivid shades of orange, yellow and red, people are looking to enjoy everything fall. According to Pinterest, there has been a 94 percent rise in searches for “autumn scenery.”

People are becoming increasingly interested in Rio, as Pinterest says “Rio de Janeiro, Brazil” had a 142 percent spike in searches over the last year. Rio is known for its pristine beaches, energetic music and Carnaval celebration.

From one-day tours to longer hauls between cities, travelers are turning to buses for a cheaper way to make the trip. Pinterest saw an increase of 32 percent for “bus travel” searches.