Something I believe in is that a good vacay requires good food. Luckily, I can always count on my dad to find the juiciest steaks, freshest seafood and best sushi joints around, and our trip to Fort Lauderdale was no different. For three nights and three and a half days, my dad and I found some incredible eateries around the area. Without further adieu, I’m just going to jump into the meat of this post (I love my horrible jokes).

We arrived at the Grand Pelican Resort early in the morning on Tuesday, May 22 and headed straight for the beach. Dad and I were not quite sure where we were going to eat for lunch, but we figured we would stay at the resort for the first day. When we went on a stroll along the water, we were intrigued by the outdoor restaurant that belonged to the hotel next to us, and when lunch time came, we gave it a try. We knew as soon as we saw the menu we made a fantastic decision.

We ended up eating on the deck of the Sandbar Grille the next three afternoons. The grill had big flavor for a little place.

Afternoon 1: I enjoyed a refreshing lobster roll which was tossed in a “signature” sauce and mixed in with celery and peppers. It was a refreshing roll and the lobster definitely shined through the sauce instead of being blanketed by it, and I appreciated that. I got it with a side of onions rings which had a flavorful, thick fried batter around perfectly sized onions. 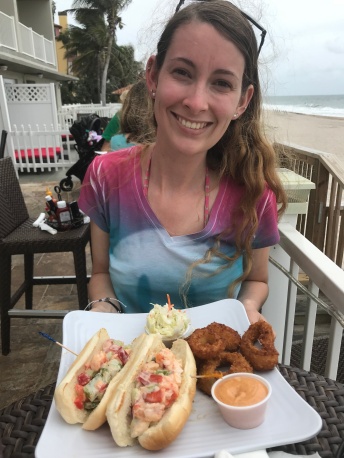 Afternoon 2: Dad and I could not be more excited to eat at The Sandbar Grille again. This time, we indulged in calamari which was drizzled in a Thai sauce and tuna tataki served on a bed of seaweed salad and topped with fried torilla strips to add some crunch. So much delicious seafood was eaten then, it might as well have been heaven. For my main course I chowed on a perfectly balanced sweet and sour Thai glazed Mahi wrap.  My mouth is watering just thinking about it. 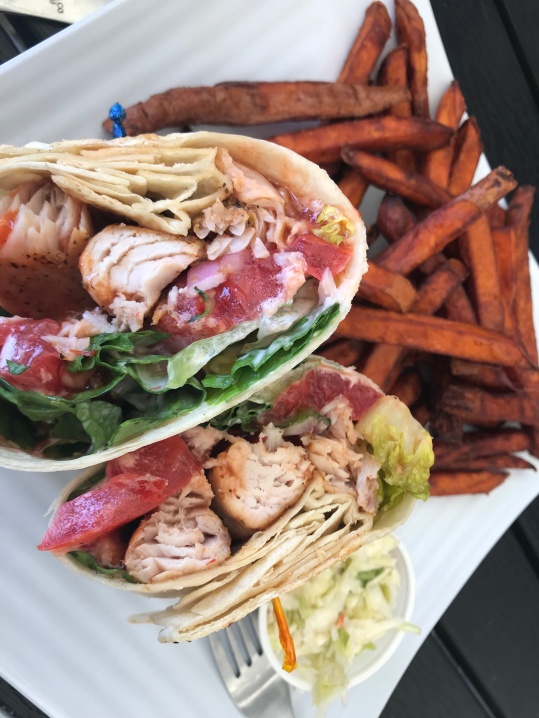 Afternoon 3: Dad and I decided to try their crab cakes for our second to last lunch. I don’t have much experience with crab cakes, but I know they can be a hit or miss. However, these were definitely a hit and I could tell they were fresh. The extremely kind and motherly waitress confirmed that by saying she saw the chefs molding them that morning. I then indulged in three Mahi soft-shell tacos which gave warmth from the shells, coolness from the fish and crunch from the peppers and salsa that dressed them.

I realized that the special on Fridays was fish and chips, so once Friday came, it was an easy choice. The fish tasted fresh and the batter, like the onion rings, was well seasoned and coated the fish well without overpowering it. Ending our streak at this grille with a classic and favorite of mine was a prime was to say goodbye.

Although our lunches we impressive, our dinners were just as delicious, or more. With some suggestions by a waitress and Google, we picked some great spots for dinner.

No vacation with my dad is complete without sushi, and that’s what we ate our first night in Ft. Lauderdale. We ended up at a restaurant called Sushi Song as per recommendation by our waitress that afternoon at the Sandbar. We were surprised to realize it was a tiny place that seemed to have a more popular take out business, but I just told my dad it let us own the whole place.

Dad and I started with some edamame and tuna tataki with an excellent ponzu sauce that had a refreshing balance of citrus tang with salty soy sauce. I enjoyed my favorite roll, and although I hate to be that person, I had them make it for me because it was not on the menu. Sometimes a girl needs her shrimp tempura with eel on top! I then enjoyed a very light roll called the Triple Roll, which consisted of tuna, salmon, white fish and avocado wrapped up in seaweed and rice with a little bit of spicy mayo on top. Between the more “comfort” flavors from the shrimp tempura and sweet eel sauce and the clean, fresh flavors from the Triple, I had an excellent pairing.

My dad and I usually try to split something different when we go out to eat, and that night we landed on a roll that had tuna and avocado on the inside and fried onions and a house sauce on top. The onions were an interesting touch that added a deeper flavor to the tuna, and the house sauce tied it all together beautifully.

We found ourselves at a place that reminded us of a home favorite our second night. Called Botkamper’s, the restaurant is right on a lagoon and can be reached by car or by boat. It boasts a huge central bar and an even larger sushi bar to the side and offers indoor and outdoor waterside seating.

The environment was ideal, and the food made it even better. Dad and I split some oysters, one of our favorite things to do together. The oysters were particularly tasty, but I am not sure what kind they were. That was paired with some ­­­– you guessed it ­­­­­­– tuna on a helping of seaweed, which was an unexpected treat. I decide on a plain cheeseburger for dinner because it is rare that I am not craving one, and it definitely did not compare to the tuna. However, comparing tuna to beef is like comparing an Audi to a Ford. 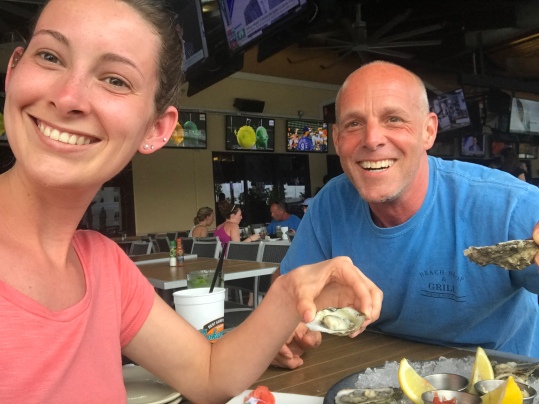 Our final night took us on a journey to a different part of Fort Lauderdale called Las Olas. After an almost two-hour water taxi ride, we were dropped off at a pier that led to the main street which boasted fancy shops and dozens of restaurants. We were not sure what we were in the mood for, so Dad and I walked up and down the street and browsed menus and even a National Geographic art gallery.

We decided on Big City Tavern because of the options it offered and the ability for us to sit outside under the awning. It turned out to be an amazing choice because we were blown away by the food. Shortly after we sat down, we dove into a freshly baked, seasoned and buttered circular loaf of fluffy bread. I could have eaten it all night. 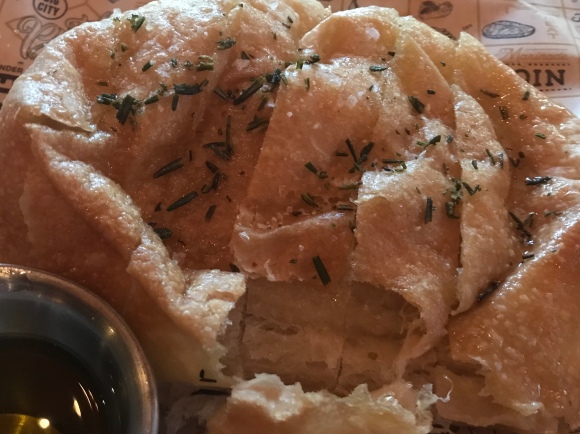 Dad and I ordered scallops to start, which are one of my favorite foods. The scallops were dressed with bacon, apples, pecans and a sweet aioli. The bacon gave a savory taste to the dish, while the pecans and apples added a sweet crunch. Just like the bread, I could have eaten these scallops all night.

The reason I was sold on this restaurant was for the pad Thai it offered, so it was an easy decision when it came to ordering. I had not eaten pad Thai since I tried it for the first time in Thailand just about a year ago, and boy had I missed it! The egg, peanuts, bean sprouts, scallions and cilantro blended well together with the peanut sauce and shrimp that was tossed into the noodles. Thailand would be proud.

I did not expect to be as blown away as I was with the food we ate in Fort Lauderdale. From the first bite I had at the Sandbar Grilled to the last spoonful of the cookies and cream and Nutella Gelato I ate after the Big City Tavern, my taste buds were dancing.

Whitmanythought 1: I wish I knew how to cook meals like the ones I had in Florida.