I was really feeling the FOMO (fear of missing out) of not being at the 2017 MTV Video Music Awards, since I was there in the pit having the time of my life last year. Despite my consistency of almost never being able to watch award shows, I made sure I was home to view how the iconic show would push political and social boundaries this year. Here are my reactions to the best and worst moments of the 34th Annual MTV VMAs. 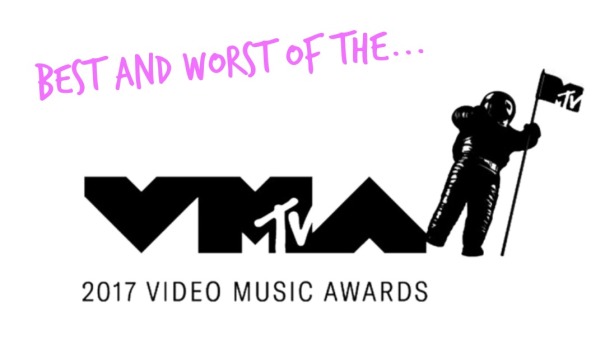 Having an earlier performance, 5H’s show stuck with me the whole night. Not because of their sexualized dance moves they love showing off, but because they totally shaded recently departed member Camila Cabello. As they opened their performance, they pushed a body off the stage, making the group transform from five to four members. This may hint to a rocky relationship with their ex bandmate, and maybe it was unnecessary, but I appreciate the guts it took for them to put on the visual stunt.

Being a huge fan of Swift, I was most excited for the world premiere of her “Look What You Made Me Do” music video. I will be honest, I was slightly disappointed with the song, but after watching that wildly symbolic video in which Swift kills and mocks her old self, this video is all I will be watching for the next few days.

Logic has moved leaps and bounds since I saw him open for G-Eazy last year, and I am beyond proud of that. I am also a huge fan of Alessia Cara and their song “1-800-273-8255” also featuring Best New Artist winner Khalid. The song doubles as the National Suicide Prevention Hotline, which was plastered on every screen alongside the words “You are not alone.” It was a moving, heartfelt tribute that also included numerous suicide survivors who walked on stage during the performance. As Khalid became overpowered with emotion, Logic concluded the performance by saying, “…I don’t give a damn if you’re black white or anything in between. We’re all born equal, but we’re treated unequal…”

Bro, the mother of Heather Heyer who was killed in Charlottesville protesting white supremacy, gave a powerful speech about hate and the start of her new Heather Heyer Foundation, which will give scholarships to students pursuing law and social justice issues. MTV also awarded every nominee for Best Fight Against the System title a moon man.

Bebe Rexha has been working her way up the charts with being the featured vocalist in numerous songs to releasing several EP albums. Although she didn’t perform on the main stage, her enthusiasm, excited dancing and obvious love for being at the VMAs caught my eye and made me more thrilled just to be watching. Thank you, Bebe, for being so entertained and entertaining!

I need to give a well-deserved shout out to Cyrus, Mendes and Lovato for giving powerful performances of their respective hits “Younger Now,” “There’s Nothing Holdin’ Me Back,” and “Sorry Not Sorry.” These performances showed what young, pop talent is all about.

I am not a huge fan of Pink, but I respect her success and her music. I was excited that she didn’t perform multiple times like last year’s Michael Jackson Video Vanguard Award winner, Rihanna. However, her medley was a strong vocal and visual performance as she sang career-spanning hits from “Raise Your Glass” to “What About Us” and did multiple stunts such as riding a four-wheel on stage. After the performance, Ellen DeGeneres presented the award and Pink gave a touching speech about self-love that focused on her daughter.

I was skeptical about Perry’s hosting gig, and my concerns were solidified from the start of the show. From her over-extended opening in which she tried preparing herself to go to the moon and then played with a fidget spinner, it just did not seem fluid. I do think she seemed comfortable and confident up on stage, but her corny jokes and basketball-themed “Swish Swish” performance fell flat.

During a preshow interview, Charlamagne asked the girls if they would share their possible Best Choreography award with Camila Cabello. After a bit of awkward hesitation, Normani Kordei explained that they would give the award to their choreographer (nice save, girl). Charlamagne in no way needed to make this awkward situation for the women. The ladies of 5H were there for a good time and to celebrate their talent, not for dealing with unthoughtful comments.

It breaks my heart to say this, but something seemed off about Sheeran’s performance of his hit song “Shape of You.” I have seen him perform live before, and I know he has sounded better than he did at the VMAs. Also, I did not think it was necessary to have Lil Uzi Vert add some lyrics to the song before switching to his own “XO Tour Lif3.”

After learning that she had the flu, I give Lorde props for still giving us an interpretive dance to her new song “Homemade Dynamite.” I have started liking Lorde a bit more recently, and I was excited to hear her sing, but it’s not her fault she is so sick.

I read articles saying that the VMAs were boring, and I whole heartedly disagree. I thought the show was full of solid performers and a great number of artists attended. I look forward to the show next year!