I believe I just encountered the most relaxed weekend of my semester here so far. My weekend consisted of a mix of homework and night adventures in Northbridge for some time away from my piles of work.

However, Sunday ended up being a great day to experience some Australian culture: I attended an Australian Football League game. Australian football/Aussie rules/footy is played on an oval field with a whopping 18 members per team trying to kick the oval-shaped ball between two tall goal posts. Players can kick, throw and run with the ball. My best way to describe it is a mix between American soccer and football.

Apparently AFL is hugely popular in Western Australia specifically. It is usually more difficult to enjoy a sport while unaware of the rules, but I had a fantastic time spectating and rooting for the Fremantle Dockers, despite the rain that fell most of the time. On the bright side, we won! For some reason, I only had a slight idea of attending an Australian sporting event while here, and I am not sure why I did not make it more of a priority. I am so thankful that Murdoch University Village snatched some student-priced tickets! 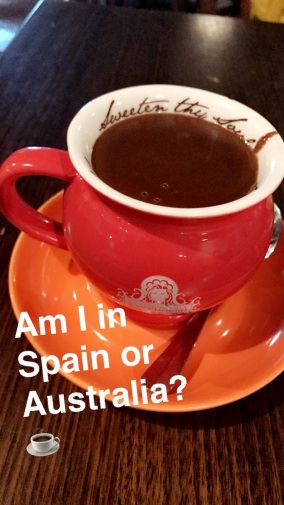 To end the night (and put off homework), my roommate and I enjoyed some churros and hot chocolate for dinner at San Churro, which is where I ate for my birthday. I was not planning on going out, but I knew that the next 10 school days would be a scramble trying to complete two projects and two papers before my next scheduled trip, so I thought I would treat myself. Can you guess where I am going next?

nothing beats a Waffle Cabin waffle 🧇
This was taken right before Xavier was accused of being on a date with two women at once. Happy birthday to my bb 🎉😘💕
I’m ready to go back to nyc now
I meant to order a mojito 🍹