I without a doubt just experienced the best weekend ever. Let me show you where it began.

Yes, right here, with these beautiful chocolate chip pancakes. I am absolutely obsessed with the pancakes the village make for us every Friday, and my chocolate-loving self can’t turn them down. I may have had too many…again…but life is too short to not have as many pancakes as I want.

Fast forward a few hours and it was time to go out. Embargo is a pop-up bar at Elizabeth Quay, and it was its last weekend until next summer, so all my friends decided to go out. The night can be summarized as this: I started the evening on a 40-foot sailboat, enjoyed some time with my friends at Embargo and then ended the night on a 44-foot boat on which I danced for hours with some really kind people followed by a cruise back to South Perth Yacht Club. I could not believe Friday night treated me so well, and I could not help feel anything but thankful for experiencing it.

The next morning, I embarked on a wine tour to the Swan Valley that was organized by the Murdoch University Village. The Swan Valley is Australia’s oldest growing region and is itsq first Humane Food Region, which means it is committed to animal welfare and producing quality foods. It boasts wineries, farms, cafes and restaurants that serve anything from specialty wines, oils and cheese to chocolate, nougat, nuts, preserves and beyond.

To start the day, we hopped in our rented bus, which we turned into a dance party with our pre-made playlist. We stopped at a wine and chocolate producing venues, where I enjoyed home-made ice cream, chocolate sauces and jams.

After this short taste of what our day would be like, we drove to our next destination: Sandalford Wines. Here we tasted an array of red and white wines, some sweet and some dry. I did not even bother to try the dry wines, because I know I prefer sweet. I actually quite liked Sandalford Founders Reserve Liqueur Tawny, which is an extremely sweet dessert wine. It recently underwent a name change so it would be within fortified wine regulations, but it is basically port, which is a strong, sweet wine originally from Portugal. I also enjoyed a few crackers with cheese before heading to the next stop.

After the enjoyable wine tasting, we were taken to Mondo Nougat for some nougat samples. I actually didn’t love the nougat, but I I did get to taste some great flavored nuts.

Following the nougat stop was Kimberley Rum Company for a taste of their Canefire concoctions. Canefire is brewed longer than any other spirit, as the company claims, and uses sugar cane right from the Kimberley region of Western Australia. I sipped on what is called the Boody Frog, which contains butterscotch and melon liqueurs and a few other ingredients. I also got a taste of Nicole’s booze-infused slushy, which I thought was fascinating. I also enjoyed watching people around me get happier as the day went on… 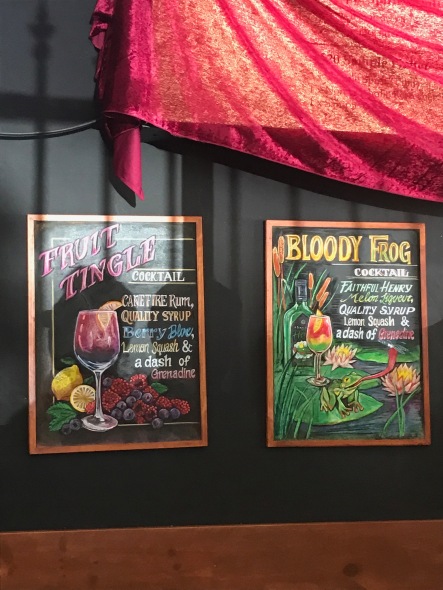 The fifth spot was a lunch break at Whiteman Park. I enjoyed a sandwich and laid out on a blanket with some people I met on the Northwest Trip. Unfortunately, we only had one more stop after this, and I was sad the day was ending. 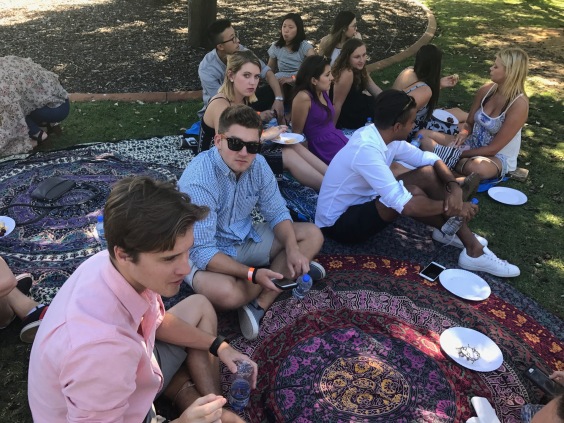 The final venue to the tour was Elmar’s, a really small, but cute outside venue that had live music and an assortment of food, beer and cider. We got a ticket for a free beer or cider, and I picked the pear cider because that was supposed to be the sweetest. However, I only had a few sips before I let someone else actually enjoy it.

The venue had such a fantastic vibe. Some people were dancing, some people were sitting at picnic tables and some were lounging on the grass. I enjoyed laying on the grass, taking in the sun and enjoying the music before I got up and danced with a really fun person I met from our group and random people he found. It was the perfect place to end the day.

After such a fantastic day, I was feeling so happy and thankful that I am living this life (well, more than usual). I did not want my day to end. So, my roommate and I took a nap after the tour, rounded up some friends and headed out to the city. We actually ended up at Embargo again and then moved to The Aviary, which is a cute rooftop bar.

Needless to say, it was a wild 24 hours. I constantly say how thankful I am for everything I get to do, but I cannot say it enough. I felt nothing but pure happiness between Friday and Saturday. I met new people, created new memories that I will surely never forget and enjoyed time with my friends, and that is all I could possibly want.

7 thoughts on “Oz: The Weekend of Bliss”