Today is the day I have been waiting for (and part of my agreement to come to London): The Making of Harry Potter Warner Bros. Studio Tour!

After taking two trains, Olivia and I were greeted by a double-decker that was completely covered in Harry Potter graphics. It was awesome! The bus even had Mr. Weasley on video talking a bit about the tour and the studios.

A few minutes later, we arrived to the studio, which is actually a bit outside London. Upon entrance, we were welcomed into an open room with a ginormous snow-covered Christmas tree, a display of costumes from Fantastic Beasts and Where to Find Them and large portraits of the Harry Potter characters throughout the years.

We waited in a short line next to the cupboard under the stairs, and it was time to enter. The moment I had been waiting for was here! 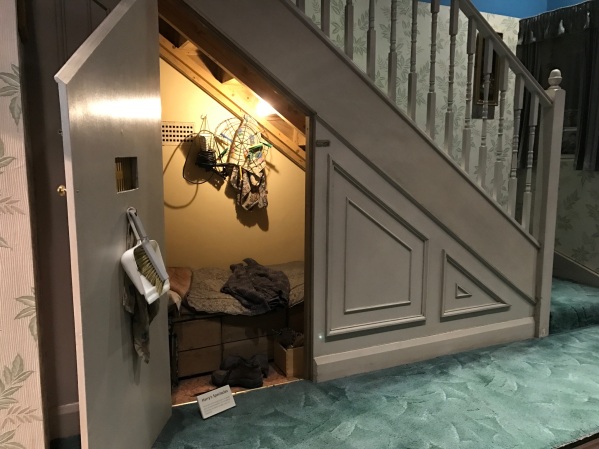 There are a series of three rooms that guides take visitors through at first. The initial room has small screens that show Harry Potter movie covers from around the world, and then play a short video about how the franchise went global. The next room shows a short film narrated by Daniel Radcliffe, Rupert Grint and Emma Watson explaining what went into the making of the beloved films over their ten-year stay at the studios. I was almost in tears.

Lastly, the screen rose and revealed a door. This was not just any door, but a grand door. It was the entrance to the Great Hall. Slowly, the doors opened and the group rushed in with eagerness. I could not believe I was in the Great Hall, the place of so many memorable moments throughout the films.

The guides spewed out some facts about the Great Hall as guests walked freely about. For example, real food was originally used for filming, but then it was switched to fake food once the real food stunk up the place. Costumes of professors lined the head of the room as they would be seated during an event in the hall. I always say this, but it amazes me how small the room seemed compared to the massive size it appears on-screen. That’s the magic of cinema!

The rest of our two hours spent at the studios were self-guided. We first went into Studio J, which is compromised of original sets and props. I could not believe how many pieces of the set were still at the studios. Just to name a few, displayed in the studio are Dumbledore’s office, the potions classroom, the giant and still moving clock from the clock tower, the Gryffindor common area and Ron and Harry’s room. The list goes on and on.

After the first studio, we were guided to an outdoor area which houses the night bus, 4 Privet Drive, Potter’s cottage in Godric’s Hollow and a piece of Hogwart’s long bridge.

I also tried the infamous Butterbeer for the first time. The foam on top was as sweet as anything with a butterscotch taste. Meanwhile, the actual drink tasted like diluted cream soda. I was not as impressed as I thought I would be, but I would definitely give it another try somewhere else.

After this middle section, we strolled into Studio K, which is split into separate rooms. The first part shows the mechanics behind the movies. I was a bit uneasy when I found out that for some scenes, Hagrid’s head was a mechanical prop! We also got to see some blueprints used to create Hogwarts, which were super fascinating.

Then, the best thing happened: We visited Diagon Alley! I had no idea the famous street would be there, and I was overwhelmed with joy.

Another incredible thing occurred next: We were able to go into the original Hogwarts Express that was used for filming. Each cart that was used during a movie is marked off and set up how it was seen in the movie. 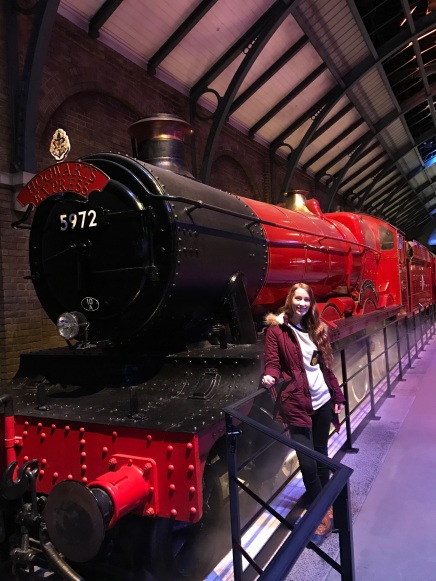 I was even more grateful when I was able to step onto Platform 9 ¾. I could not wait to do this. Fun fact: There actually is a replica Platform 9 ¾ at King’s Cross station in London.

The tour ended with a massive and jaw-dropping model of Hogwarts followed by a room filled with thousands of wands, each box bearing the name of someone who helped with any of the films.

The studios definitely lived up to my dreams and even surpassed my expectations. Now I just need to go to Harry Potter World in Florida!