With all my excitement from my Harry Potter post, I almost forgot to mention I saw a show in London!

So many people told me the thing to do in London is to visit the theatre, and being the theatre-lover that I am, I was under my own pressure to see one. After the Harry Potter tour, I accepted the fact that I was not going to see a show. However, one of the girls in the house messaged me that she saw an advertisement to buy tickets and that she thought of me. It was a calling.

After some debate, I bought a 21 pound ticket to see A Curious Incident of the Dog in the Nighttime. I had no idea what the show is about, but I knew that people had great reviews about it when it was playing in New York. So, I figured I would check it out. 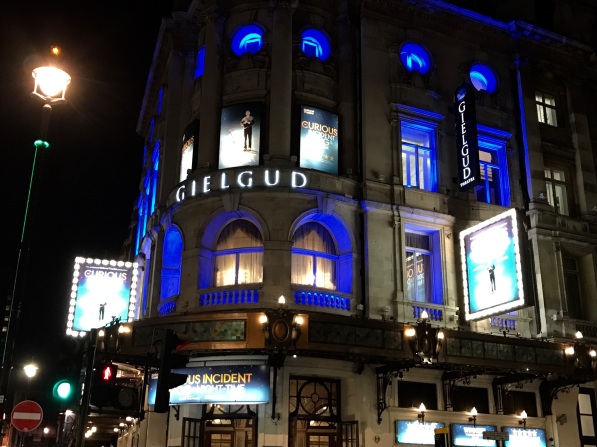 This was the first time I was going to be out in London by myself. I was a bit nervous, but I have been wanting to practice being on my own, and thought this would be a perfect opportunity. Plus, I knew where I was going, because I had visited the area on a tour a few days prior.

I arrived at the Gielgud Theater with much ease and picked up my tickets. There were two things that shocked me. First, my seat, which was in the Grand Balcony section of the theater (equivalent to Rear Balcony seating), was better than I expected. Instead of being tiered back from the stage like I am accustomed to, the upper portion of seats seemed to be at a more vertical incline, making the the seats seem more above the stage rather than away from it. I was quite pleased!

The second thing that absolutely astonished me is that London does not give out Playbills for shows. Instead, one has to buy a program. I was absolutely shocked. I am sure the program has a lot more meat to it than a Playbill, though.

The show was really interesting, as it starts off as a mystery and shows the journey of a teenager with high-functioning autism finding himself in a confusing world that does not understand him. It was filled with intense emotion and was beautifully portrayed through a minimalistic stage and the use of sound and light effects.

I am super proud of myself for being comfortable venturing off on my own, as I think it is a necessary skill to have (although my family was not too pleased). Now, I can check one more experience off my list!